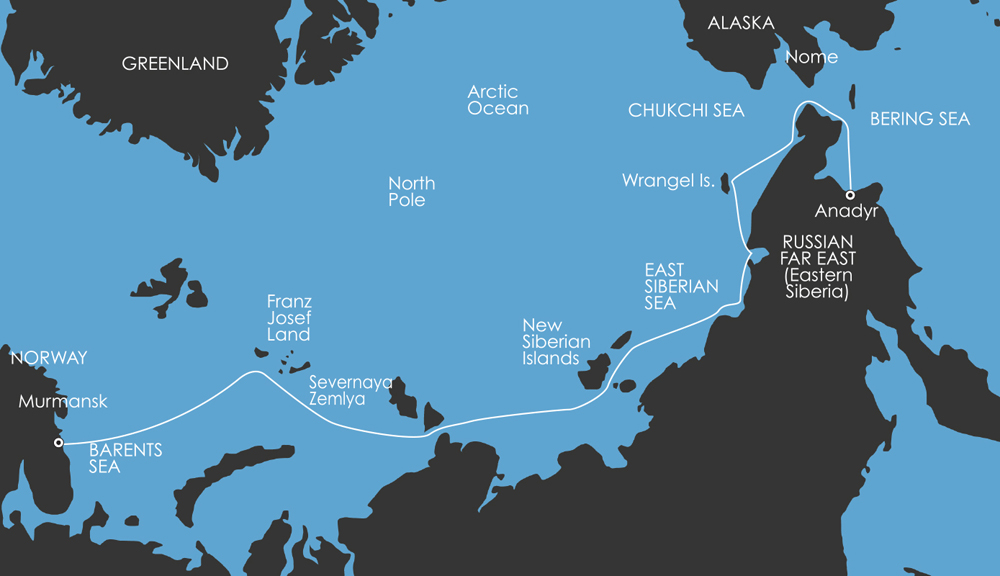 The allure of the mysterious Northeast Passage has captivated adventurers for centuries. Its Russian-controlled waters are steeped in history and mystery, while abundant wildlife is found along its remote shores. Only a handful of passenger vessels have ever completed a transit of this waterway, but recent changes in the summer sea ice conditions mean that it is now possible for a brief time each summer. In 2017, we fulfilled our long held ambition of completing a successful Northeast Passage double transit. We are excited to once again be running this geographical odyssey from Anadyr to Murmansk in 2020. Join us as we trace the route of legendary Polar explorer Adolf Erik Nordenskiold, navigate narrow fiords, search for unique wildlife, glimpse into the past and experience the warmth of Arctic hospitality in local villages.

Having been sought for centuries by European explorers who hypothesised upon its presence and economic benefits, The Great Northern Expedition of 1733-43, sponsored by Peter the Great, made many significant discoveries, but also revealed the route was not an economic trading proposition. It wasn't until 1878-1880 that Swedish explorer Adolf Erik Nordenskiold completed the first ever transit proving that the route was navigable, albeit with some difficulty. In 1914-15 Boris Vil'kitskiy, with icebreakers Taymyr and Vaygach, made the second transit of the Northern Sea Route as part of a major push by the Imperial Russian Navy to render it navigable for strategic purposes. In 1932 the Northern Sea Route Administration was established by the Soviet Union.

The vast shallow waters north of Russia, protected by the expansive sea ice that covers the region for most of the year, are a refuge for many Arctic species; Polar Bears roam throughout but there are especially large concentrations on the reserves of Wrangel Island and Franz Josef Land. During our voyage we travel through the ranges of the Pacific, Laptev and Atlantic Walrus and there is the opportunity to encounter these iconic tooth walkers in large haul outs. The triumvirate of Arctic gulls - Ivory, Sabine's and the elusive Ross's Gulls all breed on the shores of the Northeast Passage and there are good opportunities to see all three. While Bowhead, Beluga and Narwhal Whales all call these waters home and our naturalists will be keeping close watch.

Venture ashore on some of the least known and seldom visited shores on the planet, Severnaya Zemlya Archipelago was the last major group of islands on earth to be discovered, the New Siberian Islands offer a wealth of opportunities for discovery. Sailing the mythical waters of Chukchi, East Siberian, Laptev, Kara & Barents Sea this is truly a geographic odyssey.

Our vessels were built for navigating passages like this, with Akademik Shokalskiy participating in a Soviet Convoy in the late 1980s, and in 2017 transiting the passage twice unassisted with Heritage Expeditions. We invite you to join us on an historic journey to discover High Arctic landscapes that few people have witnessed, enjoy wildlife and wilderness experiences that until now have been the preserve of a few High Arctic explorers and researchers.

Join your ship this afternoon. There are excellent chances to spot Beluga Whales as we sail out of the Anadyr Estuary.

Crossing the Gulf of Anadyr there will be opportunities for wildlife watching. This afternoon we plan to explore the magnificent coastal cliffs of Preobrazhnaya Bay by Zodiac, home to an abundance of seabirds including Brunnich’s Guillemot, Crested and Parakeet Auklets, plus Tufted and Horned Puffins.

Whale Bone Alley on Yttygran Island is one of the most significant and intriguing archaeological sites in the Arctic. The waters nearby remain rich feeding grounds for whales, weather permitting we will look to take the Zodiacs in search of Gray Whales and walrus. This afternoon we plan a landing at the Gil’mimyl Hot Springs, Sandhill Cranes usually breed in the area.

Early this morning we will arrive at Cape Dezhnev, the eastern extremity of the Eurasian continent. The Bering Strait is a vitally important migratory pathway, we may see flocks of King, Common and Spectacled Eiders passing south. In the afternoon enjoy the hospitality of the local people in the village of Uelen who are predominantly Chukchi. Our visit will include a cultural performance and visit to the famous bone-carving studio and museum.

Today we plan to land on Kolyuchin Island, although we will be visiting after the peak of the breeding season, there should still be large numbers of Tufted and Horned Puffins, Brunnich’s and Common Guillemots and Black-legged Kittiwakes. There may also be an opportunity to Zodiac cruise around the base of the cliffs where there are excellent photographic opportunities. Humpback and Bowhead Whales have been seen in this area previously.

Wrangel Island is a Federal Nature Reserve and World Heritage Site of international significance. It is a major Polar Bear denning area and one of the few areas of the Arctic to not be glaciated during recent glacial episodes. It is sometimes referred to as a Polar Bear maternity ward on account of the large numbers of cubs born here. There are numerous other Arctic species which we will be looking for including Musk Ox, Arctic Fox, Snow Geese and the Snowy Owls which breed here annually. The diversity of tundra flora is exceptional and during walks ashore we should see the last flowers of summer.

This sea is defined by the Novosibirskie Islands in the west and Wrangel Island to the east, along its southern shores are three of Siberia’s major rivers, the Indigirka, Alazaya and the Kolyma. We will lookout for walrus and Bowhead Whales.

The Chukchi people that call this island home are reindeer herders and hunters. We will enjoy the warm hospitality of the local people as we learn about life on this remote island.

Today we will explore the little known and seldom visited Medvezhyi Islands (Bear Islands), an archipelago of five granitic islands. The islands have a sizeable population of Polar Bears which den on these shores over winter. A landing on the island of Chetyrekhstolbovoy offers the opportunity to hike to the unusual rock ‘pillows’ which the island is named after. On Pushkareva Island investigate the old lighthouse or enjoy the Arctic flowers that cover the expansive tundra.

It was in this sea that the Jeanette, captained by George Washington De Long, became stuck fast and was crushed by ice in 1879. Wreckage from the Jeanette found in Greenland in 1884 gave Nansen the idea for the now famous 1893-96 Fram Expedition drifting across the Arctic Ocean.

These islands, which consist of three major groups – Southern, Central (Anzhu) and Northern (De Long), mark the border between the Laptev and East Siberian Seas. We have allowed two days for exploring this remarkable yet seldom visited archipelago, conditions permitting we hope to have the opportunity to visit each group.

The Severnaya Zemlya Islands are on the border of the Kara and Laptev Seas and are an extension of the Taymyr Peninsula. These islands were not discovered until 1914-15, with the three largest heavily glaciated with deep fiords and majestic tidewater glaciers regularly calving icebergs. We aim to visit a colony of Ivory Gulls.

Lying between Novaya Zemlaya, Franz Josef Land and the Severnaya Zemlya Archipelago the Kara Sea is generally considered to be the coldest sea in Russia. Ostrov Vize is along our route to Franz Josef Land, we will look to make a landing on the island, conditions permitting.

This huge archipelago of 192 islands located only 10 degrees from the North Pole offers numerous locations to explore. Close to the permanent ice of the Arctic Ocean and accessible to the rich waters of the Atlantic gifts these waters with diverse and abundant marine life. The islands have a fascinating and rich record of exploration, scientific research and habitation. Landings planned including Cape Triest on Alger Island where the famous ‘Devil’s Marbles’ (spherical geodes) dot the landscape, Cape Flora on Northbrook Island where the remains of three historic expeditions are found in close proximity and Tikhaya Bay on Hooker Island where the numbers of guillemots and kittiwakes on the columnar cliffs of Rubini Rock are unforgettable. We also plan to visit Cape Tegetthoff where a healthy population of Polar Bears lives. There are good chances to spot Beluga and Bowhead Whales and if we are fortunate we may find Narwhal.

The Barents Sea was named in honour of Dutch seafarer and navigator, Willem Barents, who explored this region on expeditions in 1594 and 1596. As we move southwards opportunities for spotting Humpback Whales and Harp Seals that feed in these waters increase.

Murmansk is home to the Russia’s icebreaker fleet and featured as a strategically important port throughout the history of Russia. We disembark the ship in Murmansk, transfers to the airport or central hotels are provided. Enquire for a full itinerary and/or a Bird and Mammal List. Important Note: These expeditions are subject to approval from various Russian Federal and Regional Authorities and may have to change depending on these approvals. Permits have been lodged for all the sites mentioned, however depending on approvals these may have to be amended or substituted.

Important Notes:
These expeditions are subject to approval from various Russian Federal and Regional Authorities and may have to change depending on these approvals. Permits have been lodged for all the sites mentioned in the itinerary, depending on approvals these may have to be amended or substituted. We will endeavor to keep participants fully informed of any changes in the itinerary as and when they occur.